Once upon a time, there was a band of robbers who divided their boot according to their different ranks. Among the belongings, there was a Benares Kambala, the color of which left much to be desired. It was considered as an inferior part to be given to one of the robbers of the lowest rank. The robber got angry and made a strong protest to the rest.
Afterwards, he brought it to the city for sale. An honorable elderly man paid him a high price. He ended up getting more money than any other robber in the band. He then leaped for joy.
This is held to be true with the almsgiving. People who are doing almsgiving, are usually not aware whether there will be a retribution. Be it ever so little they are doing it, they, after death, go to Heaven to enjoy an unlimited amount of happiness. The less they do, the more they get. They will then regret for not having done enough.
This is just like the robber who was happy after he had got a top price for his Kambala. 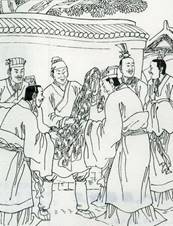