Once upon a time, there was a man who found a gold weasel while traveling. He put it inside of his shirt as he leaped for joy. Traveling on, he reached a river where he took off his clothes for crossing.
Subsequently, the gold weasel changed into a poisonous snake. Nevertheless, the man did not throw it out and kept it in the shirt. Deeply grateful, the snake changed back into pure gold.
A stupid man nearby who saw it with his own eyes, took it for granted that it should always turned out that way. He then put a poisonous snake inside of his shirt. He got bitten and died soon after.
This is also held to be true with the stupid of the world. On seeing those who have done good works and in turn have obtained benefit, people start to attach themselves to Buddhism. They are not motivated by faith but greed. They will finally fall into evil paths after death, like that man died of snakebites. 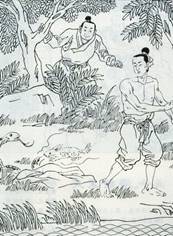