Once upon a time, there was an old woman who was resting under a tree when a bear came to attack her. She ran around the tree trying to get away, while the bear held the tree with one hand and tried to grasp her with the other. Thus hard pressed, the woman quickly hugged the tree and held fast the bear's two claws so that the bear could not move. Then a stranger came up to the spot. The old woman called out, "Let's catch and kill the bear together. We'll share its meat."
The stranger believed the old woman's words and began to help capture the bear. After seizing it, the old woman gave it up and ran away. Then he was leaving in the lurch and got injured by its claws.
This is also held to be true with the common people.
People progress heresy whose theories are far from good and whose phrases are tangled, complicated and full of errors. The successors want to continue and give an interpretation to them. However, they are unable to grasp the meaning. There for they are enmeshed in trouble just like that stupid man catching the bear for another person and getting hurt instead. 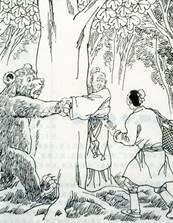