Once upon a time, there were two doves, male and female, which lived together in a nest. They filled their nest with fruit seed that grew up during the fall. Later, the fruit dried and shrank to fill but half of the nest. The male was in a temper and said to the female, "We have been working hard together for the fruit. Now you have eaten it alone. It's half of what it was.
The female replied, "I haven't eaten it alone. For the fruit has shrunk by itself."
Incredulous, the male angrily said, "If it has not been you alone who had eaten, how could it grow so much less now?"
Then he pecked the female to death. A few days later, it happened to rain heavily. The fruit got moist and grew to its former size. On seeing it, the male regretfully realized that she really had not eaten and that he had wrongly killed her. He then cried bitterly and called out to her: "Where have you gone?"
This is also held to be true with the common people. Leading a disorderly life, people indulge in wild pleasures. They think nothing of impermanence when breaking major commandments. It will be too late for them to repent afterwards. It only remains for them to give vent to their sadness with sighs like the stupid dove. 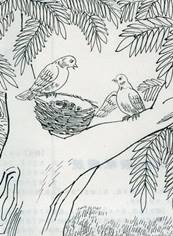