(96) PRETENDING TO BE BLIND

Once upon a time, there was a trained craftsman who worked for the king. He could not bear the hardship and deceitfully said he was blind in order to release himself from the hard work.
On hearing it, another craftsman wanted to gouge out his own eyes so as to avoid the tiresome drudgery. Someone then asked him, "Why do you want to gouge out your eyes only to make yourself suffer more in another way?"
Such a stupid man was laughed at by the people at large.
This is also held to be true with the common people. For the sake of a little fame and gain, people are prone to tell wild stories and destroy their pure commandments. They will fall into the Three Evil Paths of Transmigration after their death, like that stupid man destroying his own eyes for a little benefit. 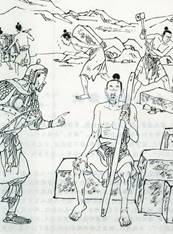