(97) THE WOOLLEN COAT WAS ROBBED BY THE WICKED THIEF

Once upon a time, two friends were walking in the wilderness. On the way, one of them wearing a woolen coat was robbed of it by a thief. The other successfully escaped into a thicket. The loser of the coat had a piece of gold concealed in the collar. To the thief, he said, "This coat is worth one piece of gold. Now I beg you to let me redeem it at that value."
The thief asked, "Where's the gold?"
Opening up the collar, the man showed it to him and said, "Here's the pure gold. If you don't trust my words, you can go and ask a goldsmith who is hiding in the thicket now?"
After seeing the second man, the thief also took his clothing from him. Such a stupid man thus lost his woolen coat, gold and everything. Not only had he lost his own belongings, he also made his friend lose them.
This is also held to be true with the common people.
Pious, having monastic grades and possessing other merits, people are robbed by the thief of temptation. They lose their good teachings and their merit as well. They lose not only the gain of their own, but also make others lose their Karma leading to Buddhahood. They will fall into the Three Evil Paths of Transmigration on the dissolution of the body after death, like the two losing everything they had. 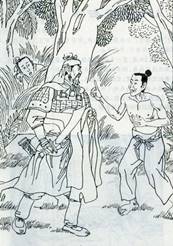