January 21, 2017
Long ago, in the state of Qin, there was a man named Xiao Shi, who loved playing the music instrument Xiao. The Xiao he played might be the vertical singular bamboo flute, or the Paixiao which consists of many pipes of gradually increasing length, each pipe producing one note. I guess the instrument Xiao Shi played must be the latter, because It is shaped like the wings of a phoenix, and it is said that when he plays the xiao, its melodious tune attracted white cranes and peacocks to dance around him, even phoenix come down from the heaven to listen! Thus, this instrument is also called phoenix pipes. 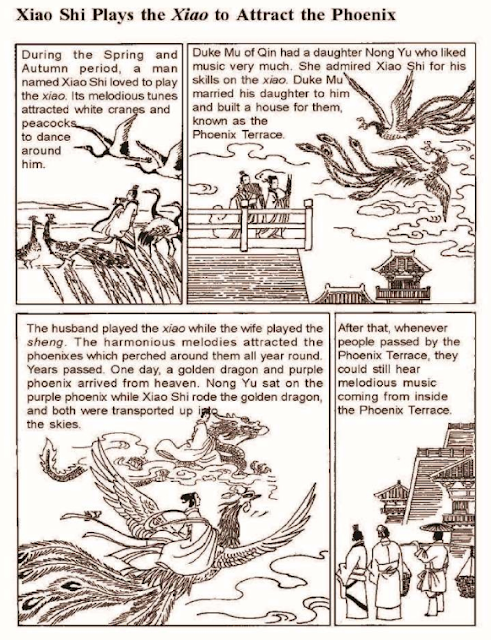 In that same state, the great Duke Mu of Qin had a beautiful daughter. For a child’s first birthday, the Chinese have a custom of setting out a plate filled with different objects for the baby to grab. In this small ritual, the parents hope to get a glimpse of the child’s future inclination. The plate held money, ink brush, jewels, books and other treasures. The Duke’s daughter’s small hand held on tight to a piece of jade. She was accordingly named Nongyu, meaning playing with jade.

Nongyu turned out to be especially gifted in music. She was best at playing the instrument “Sheng.” The Sheng was very similar to the phoenix pipes, where bamboo pipes of different tones were bound together, and shaped like a bird with outstretched wings, thus earning it the name 'phoenix sheng'. Phoenix Sheng was usually made of bamboo pipes, but Duke Mu had craftsmen carve one out of jade for his beloved daughter. The instrument produced the most delicate sound—it was both uplifting and far reaching. When Nongyu played it, birds from all over the world gathered outside her window. They chimed in and started a competition to see who made the most delightful sound.

Nongyu grew up to be exceedingly beautiful. Duke Mu had intended to marry her to a powerful prince from a neighbouring state so that his state could acquire a strong alliance through marriage. But Nongyu declined one prince after another. She said, “Father, if I have to marry, I have to marry a person who can play ‘Xiao’.” Among Chinese music instruments, “Xiao” is the companion of “Sheng.” Her father sighed and was at a loss as to where to find such a person. She was left alone.
One night when Nongyu played “Sheng” under the moonlight, a faint music drifted in with the wind and it mingled with her music in perfect harmony. This happened five nights in a row. Nongyu told her father about it and the Duke started a search in the entire state. Finally, people found a young hermit playing “Xiao” on the slope of Mount Hua, who was the young musician Xiao Shi. He was a master musician and penniless. Finding him was such a miracle that his poverty was not considered. Nongyu and Xiao Shi were happily married.

Duke Mu built a house for them, known as the Phoenix Terrace. The young couple lived happily in this palace, the husband played the Xiao while the wife played Sheng, amused each other with music, taught each other and made music together all the time. Their music advanced to such a high level that the harmonious melodies attracted the phoenixes came from the other world to listen, and perched around them all year round.

Years passed. One beautiful night, under the bright moonlight, the young played their best ever. This time a golden dragon arrived with purple phoenix from heaven. Upon finishing, Nong Yu sat on the purple phoenix while Xiaoshi rode the golden dragon, and both were transported up into the skies, leaving this world under the moonlight.

After that, whenever people passed the Phoenix Terrace, they could still hear melodious musi coming from inside the house. Two thousand years passed. The palace was long gone, of which only a dirt mound remained. But the legend has been passed down generations after generations.