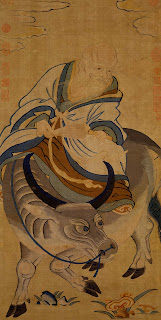 Lao-tzu, originally named Li Erh and style named Tan. He was from the state of Ch'u in the Spring and Autumn period during the 6th century BC. He was a historiographer in charge of the archives of Chou.
Confucius once traveled to Chou because he wished to ask Lao-tzu about the rites. Lao-tzu said:"The sages you speak about have long withered along with their bones. Also, when a gentleman attains proper timeliness, he rides in a carriage; when his time has not come, he wanders about with the wind. I have heard that a good merchant fills his storehouses but appears to have nothing; a true gentleman is overflowing with virtue but looks as if he was a fool. Give up your prideful airs and your manifold desires, get rid of your stiff deportment and your lascivious thoughts. all these do you  no good at all. I have nothing else to tell you."
Confucius left and later told his disciples, "Birds, I know, can fly; fish, I know, can swim; animals, I know, can run. For the running one can make a net; for the swimming one can make a line; for the flying one can make an arrow. But when it comes to the dragon, I have no means of knowing how it rides the wind and the clouds and ascends into heaven. Today I have seen Lao-tzu who really is like unto a dragon."
Lao-tzu cultivated the Tao and its virtue. He taught that one should efface oneself and be without  fame in the world. After he had lived in Chou for a long time, he perceived the Chou was in decline, so departed. It is said that when Lao-tzu went through Han Valley Pass, the official Pass Commissioner Yin Hsi felt the presence of a purple mist suddenly appearing in the air. He surmised that a great sage was passing through the area. Not long thereafter appeared Lao-tzu riding on his blue ox emanating from the east. Yin Hsi implored Lao-tzu to write down a book for later generations. Lao-tzu consented and left behind at Han Valley Pass the famous Tao-te-ching in 5,000 characters. After finishing it, he got on his ox and rode off to the west, never to be heard from again.
In Taoism, he is considered an incarnation of the "Senior Lord of the Supreme".