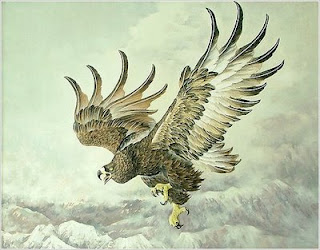 In the Chinese Taoism classic "Chuangtze", there was a legend like this:

Once upon a time, a gigantic fish named Kun lived in the northern sea. No one knew how large it actually was. This fish could change itself into the enormous bird called Peng (roc), measuring thousands of kilometers in length. When the bird was spreading its wings, it looked like huge clouds in the sky. It could, in one stretch, fly from the northern sea to the southern sea on the other side of the globe and soaring up to 90,000 li (45,000 kilometers) in the heaven.

The bird can surely fly over a long distance without stop. Now people use this idiom to with others have a long career or a bright future