Sacrifice the plum tree for the peach tree


Now there is a peach tree by a well,
And a plum tree next to it.
When worms come to gnaw at the root of the peach tree,
Te plum tree invites them to gnaw at its own root.
Finally, the plum dies, ossified.
Even trees could sacrifice itself,
Why couldn't brothers help each other


This poem originally advise people love each other, and sacrifice yourself for your brothers, but vicious people treat this as scapegoat strategy, that sacrifice the plum tree for the peach tree, or substitute one thing for another, whereby someone else suffers the consequences. Of course there are circumstances in which you must sacrifice short-term objectives in order to gain the long-term goal.


Five Brothers vie each other


One family has five brothers, all serving a minister as attendants. Every five days, they go back home for a reunion, decorating their horses and garments with shining gold. They vie with each other for ostentation and extravagance, attracting crowds of onlookers along the road.


During three Kingdoms Period China, on one of his campaigns Cao Cao was running short of food. He asked his supply sergeant what he could do. The sergeant suggested reducing the rations by secretly using a smaller cup to parcel out the rice. Cao Cao praised the sergeant and gave his consent to use the smaller measuring cup. After a few days the soldiers began to complain and accused their commander of cheating them. Cao Cao again called in the supply sergeant and told him the situation.

"I will do anything I can to help but what would you have me do?" asked the sergeant.

"I'm afraid that I have to borrow your head." replied Cao Cao and he had the sergeant decapitated and his head stuck on a tall pole with a banner that read "Caught cheating on supplies by using a smaller measuring cup."

In the Warring States period, Tian Ji is the Commander of state Qi, he always lost in his horse races to one of the princes.

In the year 353 BC, Sun Bin's use of the "besiege Wei to save Zhao" strategy sent the Wei troops rushing back to defend their state. The Wei troops split into three columns of left, centre and right in their return journey. Its left column was strongest and right column weakest.

Tian Ji decided to adopt the same strategy as in the horse race so that he could defeat two columns and suffer only one setback.

Sun Bin said, "It's not enough to win by matching the strength of forces. We can make use of our total numerical strength to annihilate the enemy. We can send our weakest column to fight Wei's strongest. Our average can fight with Wei's average column. With the advantage of terrain we can win if we know how to stall for time." 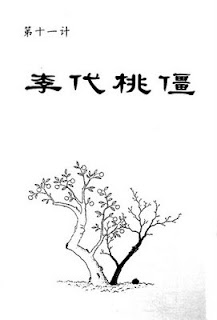