To have an image of bamboo in one's mind 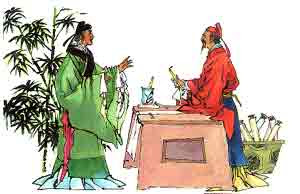 Wen Yu-ke, a painter of Song Dynasty, was fond of bamboo very much. He planted many groves of bamboo around his house, and he watched them every day to catch their different styles in different seasons.

Therefore, the bamboo he painted always looked true to life.

Su Shi (great poet and one of the Eight Great Prose Masters of the Tang and Song) once praised he was good at painting bamboo, because he had already formed images of bamboo in his mind before he actually started painting.

"To have an image of bamboo in one's mind" is often used to describe someone who has already had an overall thinking before he decides to do something.