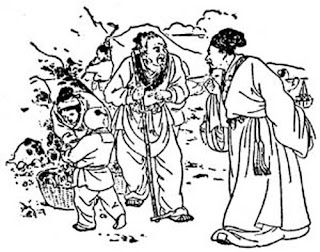 The two mountains T'ai-hsing and Wang-wu, which cover an area of 700 square li, and rise to an enormous altitude, originally stood in the south of the Chi district and north of Ho-yang. The Simpleton of the North Mountain, an old man of ninety, dwelt opposite these mountains, and was vexed in spirit because their northern flanks blocked the way to travellers, who had to go all the way round. So he called his family together, and broached a plan. 'Let us,' he said, 'put forth our utmost strength to clear away this obstacle, and cut right through the mountains until we come to Han-yin. What say you? They all assented except his wife, who made objections and said: 'My goodman has not the strength to sweep away a dunghill, let alone two such mountains as T'ai-hsing and Wang-wu. Besides, where will you put all the earth and stones that you dig up? The others replied that they would throw them on the promontory of P'o-hai. So the old man, followed by his son and grandson, sallied forth with their pickaxes, and the three of them began hewing away at the rocks, and cutting up the soil, and carting it away in baskets to the promontory of P'o-hai. A widowed woman who lived near had a little boy who, though he was only just shedding his milk teeth, came skipping along to give them what help he could. Engrossed in their toil, they never went home except once at the turn of the season.

The Wise Old Man of the River-bend burst out laughing and urged them to stop. 'Great indeed is your witlessness!' he said. 'With the poor remaining strength of your declining years you will not succeed in removing a hair's breadth of the mountain, much less the whole vast mass of rock and soil.' With a sigh, the Simpleton of the North Mountain replied: 'Surely it is you who are narrow-minded and unreasonable. You are not to be compared with the widow's son, despite his puny strength. Though I myself must die, I shall leave a son behind me, and through him a grandson. That grandson will beget sons in his turn, and those soils will also have sons and grandsons. With all this posterity, my line will not die out, while on the other hand the mountain will receive no increment or addition. Why then should I despair of levelling it to the ground at last? The Wise Old Man of the River-bend had nothing to say in reply.

One of the serpent-brandishing deities heard of the undertaking and, fearing that it might never be finished, went and told God Almighty, who was touched by the old man's simple faith, and commanded the two sons of K'ua O to transport the mountains, one to the extreme north-east, the other to the southern comer of Yung.

Ever since then, the region lying between Chi in the north and Han in the south has been an unbroken plain.

(from Book of Lieh-Tzü, Translated with Introduction and Notes by LIONEL GILES. There is another version here.)