May 21, 2011
King Chou Hsin is said to be a drunkard, he passed the whole night drinking. Sediments lay about in mounds, and there was a lake of wine, which filled three thousand persons sucking liquor like cattle, and Chou was swimming in Wine Lake, stopping neither by day nor by night.

There is another tradition that Chou had made a forest by hanging up meat, and caused naked males and females to play a cat and mouse game, chasing each other in this forest.

King Chou Hsin was famous for his for gigantic strength. His strength was such, that he could twist iron, and straighten out a hook, pull out a beam, and replace it by a pillar.

Like the tyrant king of Hsia Chieh, King Chou's debauchery arose from a passionate attachment to the woman who became his concubine, by name Ta Chi, the beautiful daughter of the Chief of Su. Ta Chi added horrible inhumanity to the extravagance and disgraceful revelry. She invented many most horrible tortures, the heartlessly breaking a men's shin bones to see which had the most marrow, the young or the old; the Heater for burning men, the Roaster for grilling them alive; the chopping of people to mince meat; the disemboweling the Prime Minister Pi Kan to examine his hearts, because she heard of saying 'the heart of a sage have seven apertures'; the cutting open pregnant woman's belly to satisfy her curiosity of finding out what happened therein.

The decisive battle between Wu Wang and Chou Hsin was the Battle of the Mu Plain. It was written in the strategical book of T'ai Kung that a young boy brought up in the camp, Tan Chiao had said: "The troops which are to destroy Yin have arrived in the plain of Mu. At dawn the soldiers carry lamps with fat, with which they are pounding their rice to make breakfast."

According to the "Completion of the War", the battle in the plain of Mu was so sanguinary, that the pestles (battle clubs) were swimming in the blood, and over a thousand Li the earth was red.

When Chou was defeated, he dressed in his royal robes, and burned himself on the "Deer Terrace" in his palace. Afterwards Wu Wang shot thrice arrows at the corpse, struck at it with his sword, and with his battle-axe severed the head from the body. 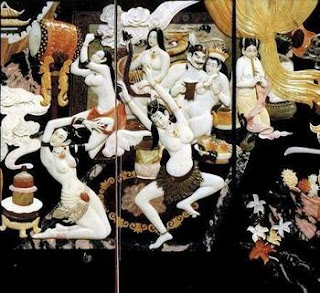