During the epoch known as that of the Three Kingdoms [221-265], Ts'ao Ts'ao, a lawless and prominent character of that period, ordered an erratic philosopher named Ti'ao Hen to come to his court. On his arrival, Ts'ao Ts'ao treated him very shabbily, at which he raised his eyes to heaven, saying, ' Heaven and earth are wide ; why then are no men to be found ? ' Ts'ao replied that he had some teens of warrior chieftains under him, and enumerated several, with commendatory remarks on each one. Ti'ao Hen laughed sneeringly, and said, 'The first may do to condole with folks after a bereavement ; the second might manage to guard a grave ; the third might answer for a doorkeeper ; the fourth, a ballad singer ; the fifth, a beater of drums and gongs ; the sixth, a cowherd ; the seventh is good at litigation ; the eighth might carry letters; the ninth, sharpen knives and swords ; the tenth can drink wine, lees and all ; the eleventh might make a fair bricklayer ; the twelfth could stick pigs and kill dogs ; the rest are mere clothes frames, rice sacks, wine barrels, and meat bags.'

' There is no knowledge, heavenly or earthly, that I have not mastered ; the three religions, and the nine professions, I know thoroughly. I can instruct emperors how to rule like the celebrated monarchs of old time ; I can display virtue comparable to that of Confucius and his disciples. But I cannot throw myself away among a set of vulgar fellows.'

At this, one of the bystanders drew his sword to behead the boaster. But Ts'ao stopped him, saying, ' I am in need of a drummer.' 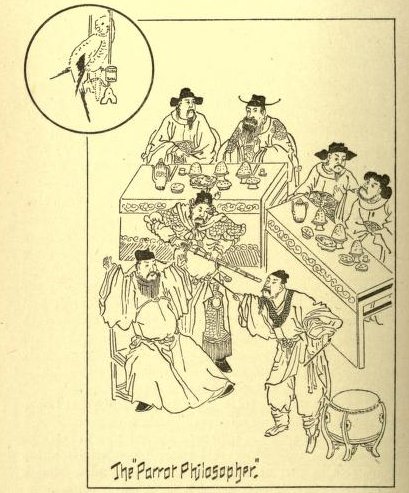 Next day Ts'ao prepared a great feast, and as the guests arrived, ordered the drum to be beaten. The philosopher-drummer appeared dressed in shabby old clothes, and began drumming away in such a style that the guests were struck with melancholy. An attendant cried out, ' Why did you come in those rags ? ' At which the philosopher began to strip !

' Yes, I do. To deceive and shamefully treat one's monarch is surely a breach of propriety. But my body, see how clean it is ! '

' You cannot distinguish between the worthy and the ignoble there is dirt in your eye. You have never studied any good books your mouth is dirty. You will not listen to faithful words your ears are dirty. You know nothing of matters, ancient or modern your breast is dirty. You are ever planning usurpation and insurrection your heart is dirty. And then you make me a drummer.' And he began drumming away more erratically than ever.

One of the guests, fearing that Ts'ao would kill Ti'ao Hen, began to plead for him.

Ts'ao replied by saying, ' Look here, I will send you to Kingchow , to get Lieu Piao to submit, thus making an ambassador of you.'

" Ti'ao Hen at first refused to go ; but three horses were prepared, and a farewell feast provided. He sat down to table with tears in his eyes, exclaiming, ' I am moving amongst dead men living in the midst of coffins.'

'Not so,' he replied, ' I am a statesman of the Han dynasty. You followers of Ts'ao are without a head.'

Several swords flashed, but one of the generals said, 'Swords should not be defiled with the blood of rats and sparrows.'

' If I am a rat, I have the heart of a man. You are a mere nest of hornets.' At which they arose and went off in a rage.

On arriving at Kingchow, Ti'ao Hen bestowed ironical praises upon Lieu Piao, who, making nothing of him, sent him to Kiangsha , the modern Wuchang. On being asked why he did not stop the old fool's tongue by beheading him, Lieu Piao replied, ' He shamed Ts'ao, who dare not kill him for fear of what folks would say. I was not going to do as he wanted me to, and thus earn the name of a slayer of good men. I have sent him off to Kiangsha, to show Ts'ao Ts'ao that I have a bit of nous.'

" Arrived at Kiangsha, Ti'ao Hen was banqueted. During the feast he was asked his opinion of Ts'ao's men. He gave characteristic replies. ' Well, and what do you think of me ? ' his host inquired.

' Oh, you are like an idol in a temple, who receives many an offering, but does nothing in return.'

' So you make me out to be a mere dummy of clay and wood ! ' cried the irate host, unsheathing his sword and hacking away at the neck of the mocker, who continued to curse as long as there was any life in him.

" Lieu Piao, however, hearing thereof, mourned for the old man, and ordered him to be buried on the islet to the south of Hanyang, which, in memory of a petition sent by the philosopher to the weak-minded Emperor, called the Parrot Ode, has been named the Parrot Islet to this day.