June 09, 2014
AT Ch'ang-ngan there lived a scholar, named Fang Tung, who though by no means destitute of ability was a very unprincipled rake, and in the habit of following and speaking to any woman he might chance to meet. The day before the spring festival of Clear Weather, he was strolling about outside the city when he saw a small carriage with red curtains and an embroidered awning, followed by a crowd of waiting-maids on horse-back, one of whom was exceedingly pretty, and riding on a small palfrey. Going closer to get a better view, Mr. Fang noticed that the carriage curtain was partly open, and inside he beheld a beautifully dressed girl of about sixteen, lovely beyond anything he had ever seen. Dazzled by the sight, he could not take his eyes off her; and, now before, now behind, he followed the carriage for many a mile. By-and-by he heard the young lady call out to her maid, and, when the latter came alongside, say to her, "Let down the screen for me. Who is this rude fellow that keeps on staring so? " The maid accordingly let down the screen, and looking angrily at Mr. Fang, said to him," This is the bride of the Seventh Prince in the City of Immortals going home to see her parents, and no village girl that you should stare at her thus." Then taking a handful of dust, she threw it at him and blinded him. He rubbed his eyes and looked round, but the carriage and horses were gone. This frightened him, and he went off home, feeling very uncomfortable about the eyes. He sent for a doctor to examine his eyes, and on the pupils was found a small film, which had increased by next morning, the eyes watering incessantly all the time. The film went on growing, and in a few days was as thick as a cash. On the right pupil there came a kind of spiral, and as no medicine was of any avail, the sufferer gave himself up to grief and wished for death. 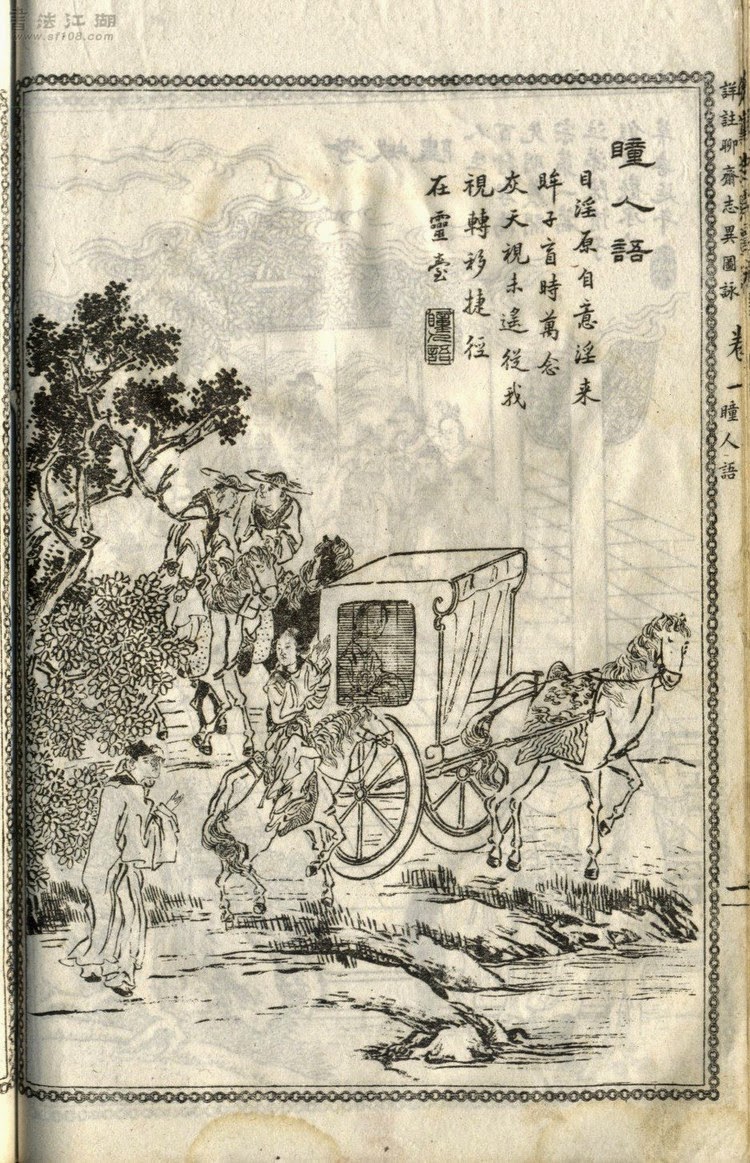 He then bethought himself of repenting of his misdeeds, and hearing that the Kuang-ming sutra could relieve misery, he got a copy and hired a man to teach it to him. At first it was very tedious work, but by degrees he became more composed, and spent every evening in a posture of devotion, telling his beads. At the end of a year he had arrived at a state of perfect calm, when one day he heard a small voice, about as loud as a fly's, calling out from his left eye: "It's horridly dark in here." To this he heard a reply from the right eye, saying, "Let us go out for a stroll, and cheer ourselves up a bit." Then he felt a wriggling in his nose which made it itch, just as if something was going out of each of the nostrils; and after a while he felt it again as if going the other way. Afterwards he heard a voice from one eye say, " I hadn't seen the garden for a long time: the epidendrums are all withered and dead." Now Mr. Fang was very fond of these epidendrums, of which he had planted a great number, and had been accustomed to water them himself; but since the loss of his sight he had never even alluded to them. Hearing, however, these words, he at once asked his wife why she had let the epidendrums die. She inquired how he knew they were dead, and when he told her she went out to see, and found them actually withered away. They were both very much astonished at this, and his wife proceeded to conceal herself in the room. She then observed two tiny people, no bigger than a bean, come down from her husband's nose and run out of the door, where she lost sight of them. In a little while they came back and flew up to his face, like bees or beetles seeking their nests. This went on for some days, until Mr. Fang heard from the left eye, "This roundabout road is not at all convenient. It would be as well for us to make a door." To this the right eye answered, "My wall is too thick; it wouldn't be at all an easy job." "I'll try and open mine," said the left eye, "and then it will do for both of us." Whereupon Mr. Fang felt a pain in his left eye as if something was being split, and in a moment he found he could see the tables and chairs in the room. He was delighted at this and told his wife, who examined his eye and discovered an opening in the film, through which she could see the black pupil shining out beneath, the eyeball itself looking like a cracked peppercorn. By next morning the film had disappeared, and when his eye was closely examined it was observed to contain two pupils. The spiral on the right eye remained as before; and then they knew that the two pupils had taken up their abode in one eye. Further, although Mr. Fang was still blind of one eye, the sight of the other was better than that of the two together. From this time he was more careful of his behaviour, and acquired in his part of the country the reputation of a virtuous man.