Engaged to a nun or Chen Yun Qi (Yun Ch'i)

July 03, 2014
AT I-ling, in Hupei, there lived a young man named Chen Yu, the son of a graduate. He was a good scholar and a handsome fellow, and had made a reputation for himself even before he arrived at manhood. When quite a boy, a physiognomist had predicted that he would marry a Taoist nun; but his parents regarded it only as a joke, and made several attempts to get him a different kind of wife. Their efforts, however, had not hitherto proved successful, the difficulty being to find a suitable match. 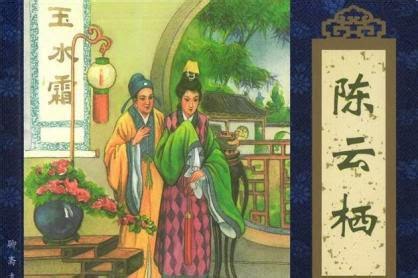 ----
You may wonder why Sister Pai and Liang entreated the young man to stay so earnestly, and Yun Ch'i lock herself up, she couldn't be just shy and afraid of strangers. There must be some reason, but you can find out just from Giles' translation:

In a few moments Miss Liang came back and told Chen that Yun-ch'i would not appear; Chen wanted to leave, but it was too late, he then pretended to be drunk and lay on his back  in bed sleeping. The two nuns stripped him naked, and had sex with him one after another without stop the whole night, Chen couldn't bear their excessiveness. As soon as the day was dawn, (生欲去，而夜已深，乃佯醉仰臥。兩人代裸之，迭就淫焉。終夜不堪其擾。天既明，) [upon which] he went off in a huff, without saying a word to either of them, and for several days did not go near the place again.

You can now see Yun-ch'i was just a bait used to capture the young handsome man for the nuns to satisfy their carnal desires. While Yun-ch'i was as good as beautiful, she wouldn't wallow in the mire with other nuns.

「人皆以妾為餌，釣君也。頻來，身命殆矣。 妾不能終守清規，亦不敢遂乖廉恥，欲得如潘郎者事之耳。」生乃以白頭相約。雲棲曰：「妾師撫養。即亦非易，果相見愛，當以二十金贖妾身。妾候君三年。如望為桑中之約，所不能也。」"They all use me as a bait to trap you. If you come here again and again, your life will be in danger.[They all declare I'm setting my cap at you, Sir; and if you come here again, I cannot answer for my safety.]  I do not wish to remain a nun, and if I could only meet with a gentleman like you, Mr. P'an, I would be a handmaid to him all the days of my life." Chen offered his hand and heart to the young lady on the spot; but she reminded him that her education for the priesthood had not been accomplished without expense, "and if you truly love me," added she, "bring twenty ounces of silver wherewith to purchase my freedom. I will wait for you three years with the utmost fidelity."