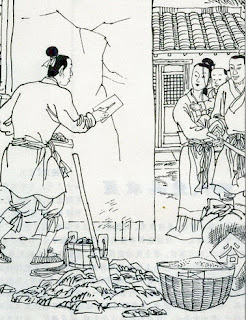 Once upon a time, there was a man who went to another man's house, which had just been painted, and the floor made even. It was nice and clean. He asked the host, "With what paint did you make the wall so white and beautiful?"
The host replied, "I mixed rice bran with water and clay. The beauty is the result."
To himself, the guest said, "It would be better if he had used rice grain instead of bran. The wall would be more smooth and more beautiful."
He then used his own formula on his own house. The walls turned out to be concave and convex with cracks on them.
The stupid man thus wasted all his rice grain. It had better have done alms-giving to obtain any merits.
So are the common people. Those who have heard the Saints preaching that people who do good deeds may go to Heaven after death and consequently get deliverance, commit suicide to get there. They merely lose their lives in vain without getting anywhere just like that stupid man with his paint.