(45) THE SLAVE GUARDS THE DOOR 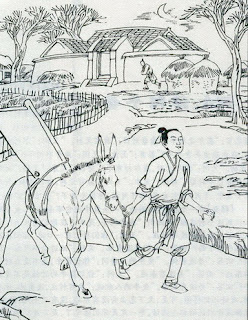 Once there was a man who was about to take a long trip. He gave orders to his slave and said, "Keep a close watch over the door as well as the donkey and the rope".
After his departure, the neighbour was playing music which drew attention of the slave. He put the rope and the door on the ass' back and went to the neighbour to listen to the music. The house was then ransacked by a thief after he had left it. On his return, the master asked the slave what had happened to his house.
The slave replied, "You told me to take care of the door, the ass and the rope. I know nothing about the rest."
Again the master said, "The whole idea of watching the door is for you to watch the house. Now that the house has been robbed, what's the use in having the door?"
Stupid men in the world cling to birth and death (or transmigration) by their lust for life like the slave to the door.
Buddha preaches to control the six sense organs (the door) without attaching to the six objective fields. In addition, he advises to keep watch on human folly (the ass) as well as all desires (the rope). However, most monks do not follow the teachings of Buddhism seeking enviously material offerings from others. Even when practicing meditation, they give an appearance to being pure and clean. But their minds are still unsettled by their attachment to the five desires and deluded by sight, sound, smell, taste etc. When ignorance takes over the mind and attachment to desires comes into being, all lost will be the right thought, the enlightened mind and the monastic grades (Just as the robbed house of the told story).