(8) A RUSTIC STEALS CLOTHES FROM THE PALACE TREASURY

May 13, 2016
Once upon a time there was a rustic who stole garments from the palace and then escaped to a remote place. The king sent men to search for him in all directions. Finally, he was arrested and taken to the king who accused him of theft and asked him where he had got the clothes. The rustic answered that they belonged to his grandfather. The king then ordered him to put them on. He did not know how to wear them. He put on his arms what should be worn on his legs. What he ought to have on his waist, he put on his head. Seeing this, the king summoned his ministers for consultation on the matter.

"If the clothes belonged to your grandfather, you should know how to wear them. How can you wear them in all wrong ways? It's certain that they are not your old clothes. You have stolen them," said the king.

Figuratively speaking, here the king is like Buddha; the valuable clothes, the Buddhist teachings; the stupid rustic, the heretic.

A heretic, who has eavesdropped on Buddhism, makes it for his own. He then misinterprets it, because he does not know the real meaning of its teachings.

This heretic is like the rustic who stole the king's valuable clothes without knowing how to wear them properly and put them on in all the wrong ways. 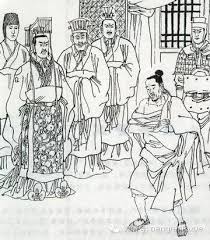