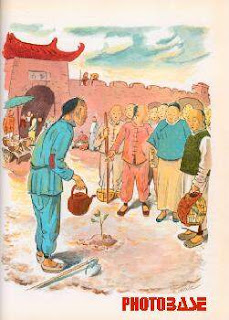 Once upon a time a countryman came into the town on market-day, and brought a load of very special pears with him to sell. He set up his barrow in a good corner, and soon had a great crowd round him ; for everyone knew he always sold extra fine pears, though he did also ask an extra high price. Now, while he was crying up his fruit, a poor, old, ragged, hungry-looking priest stopped just in front of the barrow, and very humbly begged him to give him one of the pears. But the countryman, who was very mean and very nasty-tempered, wouldn't hear of giving him any, and as the priest didn't seem inclined to move on, he began calling him all the bad names he could think of. " Good sir," said the priest, " you have got hundreds of pears on your barrow. I only ask you for one. You would never even know you had lost one. Really, you needn't get angry."

"Give him a pear that is going bad ; that will make him happy," said one of the crowd. "The old man is quite right ; you'd never miss it."

"I've said I won't, and I won't!" cried the countryman ; and all the people close by began shouting, first one thing, and then another, until the constable of the market, hearing the hubbub, hurried up ; and when he had made out what was the matter, pulled some cash out of his purse, bought a pear, and gave it to the priest. For he was afraid that the noise would come to the ears of the mandarin who was just being carried down the street.

The old priest took the pear with a low bow, and held it up in front of the crowd, saying, " You all know that I have no home, no parents, no children, no clothes of my own, no food, because I gave everything up when I became a priest. So it puzzles me how anyone can be so selfish and so stingy as to refuse to give me one single pear. Now I am quite a different sort of man from this countryman. I have got here some perfectly exquisite pears, and I shall feel most deeply honoured if you will accept them from me." " Why on earth didn't you eat them yourself, instead of begging for one?" asked a man in the crowd. "Ah," answered the priest, " I must grow them first." So he ate up the pear, only leaving a single pip. Then he took a pick which was fastened across his back, dug a deep hole in the ground at his feet, and planted the pip, which he covered all over with earth. " Will some one fetch me some hot water to water this ? " he asked. The people, who were crowding round, thought he was only joking, but one of them ran and fetched a kettle of boiling water and gave it to the priest, who very carefully poured it over the place where he had sowed the pip. Then, almost while he was pouring, they saw, first a tiny green sprout, and then another, come pushing their heads above the ground; then one leaf uncurled, and then another, while the shoots kept growing taller and taller ; then there stood before them a young tree with a few branches with a few leaves ; then more leaves ; then flowers ; and last of all clusters of huge, ripe, sweet-smelling pears weighing the branches down to the ground ! Now the priest's face shone with pleasure, and the crowd roared with delight when he picked the pears one by one until they were all gone, handing them round with a bow to each man present. Then the old man took the pick again, hacked at the tree until it fell with a crash, when he shouldered it, leaves and all, and with a final bow, walked away.

All the time this had been going on, the countryman, quite forgetting his barrow and pears, had been in the midst of the crowd, standing on the tips of his toes, and straining his eyes to try to make out what was happening. But when the old priest had gone, and the crowd was getting thin, he turned round to his barrow, and saw with horror that it was quite empty. Every single pear had gone ! In a moment he understood what had happened. The pears the old priest had been so generous in giving away were not his own ; they were the countryman's ! What was more, one of the handles of his barrow was missing, and there was no doubt that he had started from home with two ! He was in a towering rage, and rushed as hard as he could after the priest ; but just as he turned the corner he saw, lying close to the wall, the barrow-handle itself, which without any doubt was the very pear-tree which the priest had cut down. All the people in the market were simply splitting their sides with laughter; but as for the priest, no one saw him any more. Huit Just A Kiss Magic Air Bra (Google Affiliate Ad)