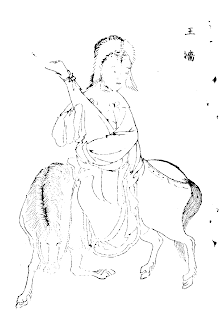 Wang Zhaojun was one of the four China’s ancient beauties, and is perhaps the best known of China's "political brides".

According to this article, during the reign of Emperor Yuan (48-33BC), Wang Zhaojun, entered the imperial harem willingly to save her father, a scholar-official, from persecution.
At that time, the Han emperor chose concubines from his vast harem of lady-in-waitings by being first presented with portraits of all the possible women. As a result of this practice, it had become the custom for palace ladies to offer large bribes to court artists to ensure that they painted a flattering likeness. Wang Zhaojun, however, refused to bribe the court painter Mao Yanshou. As a result Mao Yanshou painted an unflattering picture of her. From the finished portrait, she seemed to be the ugliest of all the palace ladies, Wang Zhaojun's portrait was either never viewed by the Emperor, or was not in its true form, and therefore the Emperor overlooked her.
The prince of Hun tribe came to the Han capital to request a Han princess as a bride. Unwilling to pick out a real beauty, the emperor ordered that the plainest girl in the harem be selected for the marriage, and gave her away like his own daughter. Wang Zhaojun volunteered to go. When the lady-in-charge of the harem sent the unflattering portrait of Wang Zhaojun to the emperor, he merely glanced at it and nodded his approval.

Only when Wang Zhaojun was on the point of departure did the Emperor set eyes on her. Much to his dismay, he realized his terrible mistake that Wang Zhaojun was in fact the loveliest woman in his harem. He wanted to find a substitute for her; however, it was too late for the Emperor to change his mind. The fate of Wang Zhaojun had however been sealed. In anguish and sorrow, he parted with Wang Zhaojun. The court artist Mao Yanshou was subsequently put to death for deceiving the Emperor.

According to this Wikipedia article, Wang Zhaojun became a favourite of the Hun Prince, giving birth to two sons and at least one daughter. When the Hun Prince died, Wang Zhaojun requested to return to China. Then Han Emperor, however, ordered that she follow the Hun levirate custom and become the wife of the next Chanyu, the oldest brother next her husband.

According to other legends, she commits suicide after her husband's death as her only resort in order to avoid marrying his son.