The Origin of the Zhou Dynasty

November 12, 2009
The ancestor of Zhou dynasty’s royal family was Hou Ji). Hou Ji’s mother’s nameds Jiang Yuan of the tribe of You Tai Shi. She was the primary wife of King Ku who was one of the five emperors of the Chinese myth. 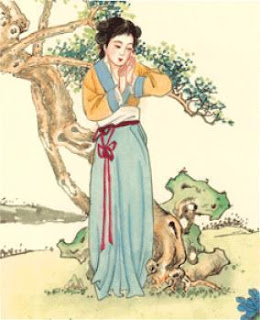 One day, Jiang Yuan went to the wilderness, she saw a giant's foot print. She stepped on it and was “moved” and became pregnant. When she gave birth to Hou Ji, he was born still covered with some sort of membrane and looked like an egg. His family thought he was unlucky, and they abandoned him on the street, but the horses and cows avoided stepping on him. His family removed him to the forest. However, there were woodcutters in the forest. They threw him onto ice. The birds gathered and covered him with their wings. Jiang Yuan thought there must be gods protecting him, so she took him back. Because she had abandoned him at first, she called him Qi.

Since Hou Ji’s childhood, he liked to plant things and he was very good at it. People learned from him and improved their farming techniques. When King Yao learned about it, he appointed Hou Ji as the Minister of the Husbandry to teach people farming matters. Later, King Shun appointed him the fiefdom of Tai which was probably the land of his mother’s, and gave him the title “Hou Ji” (the Chieftain of Farmers). He became the ancestor of Zhou dynasty.

In the Classic of Odes (Shijing), there is an ode detailing the origin of the Zhou, dating from approximately the 8th century BCE.

The first birth of [our] people ,
Was from Jiang Yuan .
How did she give birth to [our] people ?
She had presented a pure offering and sacrificed ,
That her childlessness might be taken away .
She then trod on a toe-print made by God , and was moved ,
In the large place where she rested .
She became pregnant ; she dwelt retired ;
She gave birth to , and nourished [a son] ,
Who was Hou-ji .

When she had fulfilled her months ,
Her first-born son [came forth] like a lamb .
There was no bursting , nor rending ,
No injury , no hurt ; --
Showing how wonderful he would be .
Did not God give her the comfort ?
Had He not accepted her pure offering and sacrifice ,
So that thus easily she brought forth her son ?

When he was able to crawl ,
He looked majestic and intelligent .
When he was able to feed himself ,
He fell to planting large beans .
The beans grew luxuriantly ;
His rows of paddy shot up beautifully ;
His hemp and wheat grew strong and close ;
His gourds yielded abundantly .

The husbandry of Hou-ji ,
Proceeded on the plan of helping [the growth] .
Having cleared away the thick grass ,
He sowed the ground with the yellow cereals .
He managed the living grain , till it was ready to burst ;
Then he used it as seed , and it sprang up ;
It grew and came into ear ;
It became strong and good ;
It hung down , every grain complete ; --
And thus he was appointed lord of Tai .

He gave his people the beautiful grains : --
The black millet , and the double-kernelled ;
The tall red , and the white .
They planted extensively the black and the double-kernelled ,
Which were reaped and stacked on the ground .
They planted extensively the tall red and the white ,
Which were carried on their shoulders and backs ,
Home for the sacrifices which he founded .

And how as to our sacrifices [to him] ?
Some hull [the grain] ; some take it from the mortar ;
Some sift it ; some tread it .
It is rattling in the dishes ;
It is distilled , and the steam floats about .
We consult ; we observe the rites of purification ;
We take southernwood and offer it with the fat ;
We sacrifice a ram to the Spirit of the path ;
We offer roast flesh and broiled : --
And thus introduce the coming year .

We load the stands with the offerings ,
The stands both of wood and of earthenware .
As soon as the fragrance ascends ,
God , well pleased , smells the sweet savour .
Fragrant is it , and in its due season !
Hou-ji founded the sacrifice ,
And no one , we presume , has given occasion for blame or regret in regret to it ,
Down to the present day . 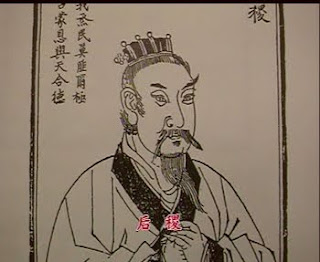