How to keep in alliance with the aggressive Power

October 21, 2010
Lian Po was a prominent military General of Zhao during the Warring States period of China. Bai Qi, Wang Jian, Li Mu and he were commonly known as the Four Greatest Generals in Warring States. The story "Carrying Thorned Grass and Pleading Guilt" make him a household name for generations.

In Lian Po's early years, he had victories in the wars against Qi and Wei. Lin Xiangru, a minister of Zhao, was disliked by Lian Po, because of his rapid rise to power and genius. But Lin Xiangru, in several famous incidents, took great steps to avoid Lian Po; in one case he even turned from Lian Po's carriage rather than block the great general's route. Eventually, all this began to cause shame and embarrassment to Lian Po, and he carried sharp brambles on his shoulder without clothing and asked Lin Xiangru to forgive him. Afterwards, they became good friends. 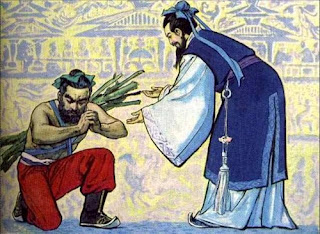 Another story shows how a small state survived by displaying submission to a powerful state:

In winter, the marquis Mu of Cai went along with duke Xi of Xu, and had an interview with the viscount of Chu in Wucheng. The baron of Xu appeared with his hands tied behind his back, and holding a bi in his mouth. His great officers wore headbands and other clothes of the deepest mourning, and the inferior officers pushed a coffin along on a carriage. The viscount asked Feng Bo what he should do, who replied, "When king Wu had vanquished Yin, Qi, viscount of Wei, appeared before him in this fashion. King Wu with his own hands loosed his bands, received his bi, ordered away the emblems of doom, burned his coffin, treated him courteously, and robed him, sending him back to his place." The viscount of Chu followed this example.