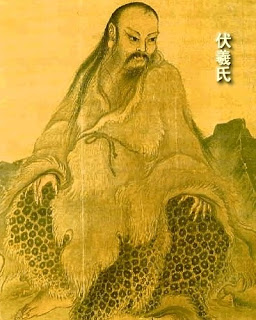 Fu Xi was born on the lower-middle reaches of the Yellow River in a place called Chengji.

The land was swept by a great flood and only Fu Xi and his sister Nüwa survived. They retired to Kunlun Mountain where they prayed for a sign from the Emperor of Heaven. The divine being approved their union.

Then Fu Xi and Nüwa found a way by using clay to create human figures, and made the clay figures to come alive.

Fu Xi taught his opffsprings to cook, to fish with nets, and to hunt with weapons made of iron. He instituted marriage and offered the first open air sacrifices to heaven.

Fu Xi developed the Eight Diagrams from the marks on the back of a tortoise.