May 22, 2011
During the Spring and Autumn period, there was a remarkable archer, Hsiung Ch'u Tse of Ch'ü, he could shoot at an weeping willows leaf a hundred steps away, with a hundred shots he hit it a hundred times.

One night, he went back home from a feast, a bit drunk. In the dark he saw a stone lying on the ground, which he took for a crouching tiger. He grasped his bow, and shot at it. The arrow disappeared up to the feathers.

The next morning, he came back to the spot where he shot the tiger, intending to take back his trophy. To his surprise, there was no tiger there rather than a stone. Out of fright the arrow was shot with such a force, that it entered deep into the stone!

Some said that the archer was actually Yang Yu Chi of Ch'u State, others speak of Li Kuang, who was a general of Han dynasty. Instead of a tiger, some speak of a rhinoceros, anyway, both being fierce animals, it amounts to the same. 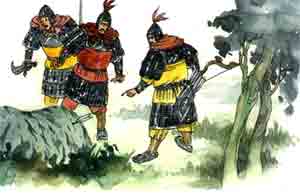