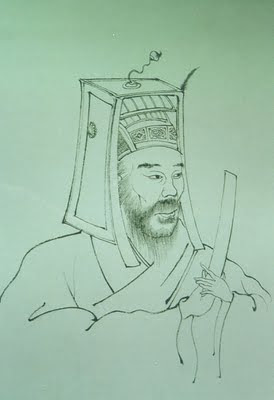 Wang Yang-ming (王陽明)was born in the eighth year of the reign of Emperor Ch'eng Hua(1472, 明宪宗成化八年), in the ninth month and the thirtieth day, having been carried by his mother for fourteen months. His father’s mother, named Ts’en, in a dream saw a spiritman clothed in dark red silk decorated with precious stones, playing and drumming in the clouds as he brought the child. When she awoke the child was already crying. His grandfather accordingly called him Yün (雲cloud) and the neighbors called the place Auspicious Cloud Loft(瑞雲樓).
Early life

In the twelfth year of Ch’eng Hua, at the age of five, he was still unable to speak. A passing Buddhist priest beholding him said, "A good child, but unfortunately his name has been made known." Influenced thereby, his grandfather changed his name to Shou-jen(守仁), and forthwith he was able to speak. The boy often secretly repeated the contents of his grandfather s books. When his surprised grandfather asked him how this was possible, he said, "I remembered what I heard you read. In the seventeenth year of Ch eng Hua, when he was ten, his father became a Chinshih (進士).

When the boy was eleven his father went to the capital, Peking, to be an official, and the grandfather, who accompanied him, took Yang-ming along. When they passed Chinshan, near Chinkiang, the grandfather and a friend were writing a poem. As they did not finish it, Yang-ming helped with four sentences. The friend, greatly astonished, gave the boy the subject, "The Mountain Hides the Moon," and forthwith the child gave a verse, which is published in his writings.

The next year he was studying in the capital city. One day when walking on the Ch’angan Street with some companions, he met a fortune teller, who said, "I will tell your fortune. When your beard reaches your collar, you will enter the realm of the sage ; when it reaches your diaphragm, your knowledge will have begun; and when it reaches your abdomen, your knowledge will be complete." Wang was profoundly influenced by these words, and when he returned to school asked his teacher, "What is the most important thing in life?" The teacher said, "Study to become a Chinshih. " Yang-ming replied. "Perhaps not. Study to become a sage: that is the first and the greatest occupation.

When he was thirteen, his mother died. In the twenty- second year of Ch’eng Hua, when he was fifteen, a rebel lion occurred in the capital, led by Shih Ying and Wang Lung, and another in the province of Shansi, led by Shih Ho-shang and Liu Ch’ien-chin. At that time Yang-ming lived at Chüyungtuan and learned to ride horseback and to use the bow and arrow. He also asked the barbarous tribes there how they protected themselves against their enemies. At this occupation he spent a month before re turning. In a dream he visited the temple of General Ma Yüan and while there wrote a poem, which is published in his works. Deploring the condition of the times, he wished to present a memorial to the throne, but his father refused to allow it.

In the first year of Hung Chih, 4 the Teacher (Wang Yang-ming) was seventeen years of age. In the seventh month of that year he went to Hungtu, where he married a woman named Chu, the daughter of a state counselor. 5 The day the betrothal presents were sent he happened to enter a temple called T’iehchukung, and seeing a Taoist priest sitting with crossed legs, greeted him and sat down opposite him. As he forgot to return, his wife’s father sent men in search of him, but failed to find him. He did not return until the next day.

In the yamen y there were a number of boxes of paper which he soon used up. for he wrote daily and his knowledge of writing characters rapidly increased. He frequently said, "When I first wrote characters, I followed the ancient models carefully and got merely the form of the letters. Afterwards I added thought to my effort and kept the shape of the characters in mind. In that way after a long time I succeeded in understanding the method. This continued until I had read the elder philosopher Ch’eng who said, When I write characters I am very reverent. It is not that I wish to write well, but because reverence itself is knowledge. Then I said, Since he did not wish the writing to be excellent, why did he learn to write? However, I see this, that the ancients at all times and in all things learned from the mind itself. If the mind is dis criminating and clear, skill in the writing of characters will be included." Later, when he spoke of philosophy to his students, he often referred to this.