Madam of Shi, or the Peach Blossom Woman

In the lawless times of the Chow dynasty, the prince of the State of Ts'ai, who was at enmity with the prince of the small State of Shi [B.C. 682], heard admiring accounts of the unparalleled beauty of the latter's wife, and reported the same to the prince of Ch'u. That prince went off at once on a visit to Shi, and was entertained with all due hospitality ; which he recompensed by carrying off both husband and wife. The one he made doorkeeper, the other he kept within his palace. She had previously meditated drowning herself in a well, and now she declined to speak for three years. Piqued with her obstinacy, the prince of Ch'u went off to conquer the territory of Shi, but with only partial success.

While he was away, the faithful wife, happening to see her husband from the balcony, broke her long silence by saying to him, ' We can but die once ; why then do we consent to prolong this misery and disgrace ? Alive we can but live apart, but through death we may at least be united in one grave. Let us die, and thus end our separation.' Saying which she slew herself, and her husband followed her example.

On his return, the prince was so struck with her fidelity that he restored the State of Shi to its former privileges, buried the lady and her husband in a spot in Hanyang, which was the capital of Ch'u erecting a temple of some size and splendour to her memory. A modern temple marks the spot to this day. It is called the Temple of the Peach Blossom Woman. 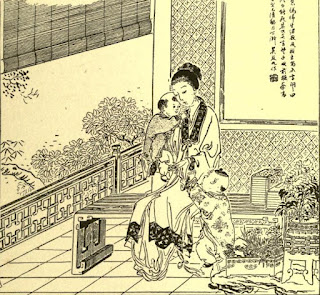