October 09, 2013
Guan Yü, whose name was originally Fêng Xian,  and style name Chang-shêng (live long), afterward changed to Yün-chang, who was born near Chieh Liang, in Ho Tung (now the town of Chieh Chou in Shansi). His father was a blacksmith of Fêmg Family.

Guan Yü was of an intractable nature, having exasperated his parents, was shut up in a room from which he escaped by breaking through the window.

He ran away to the county town, and there stayed in a tavern. As he has nothing to do there, he took a walk one day, in one of the neighbouring houses he heard a young lady and an old man weeping and lamenting. Running to the foot of the wall of the compound, he inquired the reason of their grief. The old man replied that though his daughter was already engaged, the uncle of the local official, smitten by her beauty, wished to make her his concubine. His petitions to the official had only been rejected with curses.

Beside himself with rage, the youth seized a sword and went and killed both the official and his uncle. He escaped through the T’ung Kuan, the pass to Shensi. Having with difficulty avoided capture by the barrier officials, he knelt down at the side of a brook to wash his face; when lo! his appearance was completely transformed. His complexion had become reddish-grey, and he was absolutely unrecognizable.

As he stood in front of the high tower of the Tung Guan Pass, watching a group of wild geese flying pass the blue sky, a feather of the bird dropped down and setttled beside his feet. Suddenly he had an idea of making up his name by combining "Pass" and "Feather", that was Guan Yü.

He then presented himself with assurance before the officers, who asked him his name. “My family name is Guan,” he replied,  "and my style name is Yü.", which means the feather of the bird.

It was by that name that he was thereafter known. 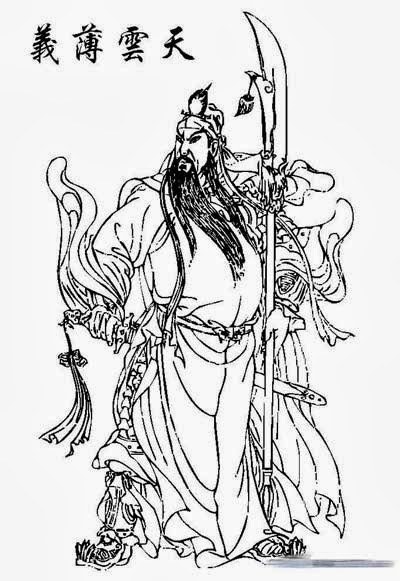