July 01, 2014
AT Chao-ch'eng there lived an old woman more than seventy years of age, who had an only son. One day he went up to the hills and was eaten by a tiger, at which his mother was so overwhelmed with grief that she hardly wished to live. With tears and lamentations she ran and told her story to the magistrate of the place, who laughed and asked her how she thought the law could be brought to bear on a tiger. But the old woman would not be comforted, and at length the magistrate lost his temper and bade her begone. Of this, however, she took no notice; and then the magistrate, in compassion for her great age and unwilling to resort to extremities, promised her that he would have the tiger arrested. Even then she would not go until the warrant had been actually issued; so the magistrate, at a loss what to do, asked his attendants which of them would undertake the job.  Upon this one of them, Li-Neng, who happened to be gloriously drunk, stepped forward and said that he would; whereupon the warrant was immediately issued and the old woman went away. When our friend, Li-Neng, got sober, he was sorry for what he had done; but reflecting that the whole thing was a mere trick of his master's to get rid of the old woman's importunities, did not trouble himself much about it, handing in the warrant as if the arrest had been made. "Not so," cried the magistrate, "you said you could do this, and now I shall not let you off." Li-Neng was at his wits' end, and begged that he might be allowed to impress the hunters of the district, this was conceded; so collecting together these men, he proceeded to spend day and night among the hills in the hope of catching a tiger, and thus making a show of having fulfilled his duty.

A month passed away, during which he received several hundred blows with the bamboo, and at length, in despair, he betook himself to the Ch'eng-huang temple in the eastern suburb, where, falling on his knees, he prayed and wept by turns. By-and-by a tiger walked in, and Li-Neng, in a great fright, thought he was going to be eaten alive. But the tiger took no notice of anything, remaining seated in the doorway. Li-Neng then addressed the animal as follows: "O tiger, if thou didst slay that old woman's son, suffer me to bind thee with this cord;" and, drawing a rope from his pocket, threw it over the animal's neck. The tiger drooped its ears, and allowing itself to be bound, followed Li-Neng to the magistrate's office. The latter then asked it, saying, "Did you eat the old woman's son?" to which the tiger replied by nodding its head; whereupon the magistrate rejoined, "That murderers should suffer death has ever been the law. Besides, this old woman had but one son, and by killing him you took from her the sole support of her declining years. But if now you will be as a son to her, your crime shall be pardoned." The tiger again nodded assent, and accordingly the magistrate gave orders that he should be released, at which the old woman was highly incensed, thinking that the tiger ought to have paid with its life for the destruction of her son.

Next morning, however, when she opened the door of her cottage, there lay a dead deer before it; and the old woman, by selling the flesh and skin, was able to purchase food. From that day this became a common event, and sometimes the tiger would even bring her money and valuables, so that she became quite rich, and was much better cared for than she had been even by her own son. Consequently, she became very well-disposed to the tiger, which often came and slept in the verandah, remaining for a whole day at a time, and giving no cause of fear either to man or beast. In a few years the old woman died, upon which the tiger walked in and roared its lamentations in the hall. However, with all the money she had saved, she was able to have a splendid funeral; and while her relatives were standing round the grave, out rushed a tiger, and sent them all running away in fear. But the tiger merely went up to the mound, and, after roaring like a thunder-peal, disappeared again. Then the people of that place built a shrine in honour of the Faithful Tiger, and it remains there to this day. 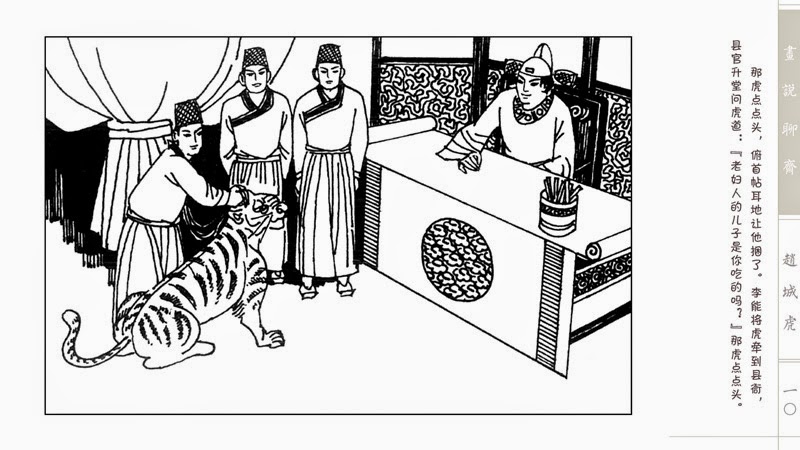