With sports and embroidered garments, Lao Lâi-dze amused his parents

August 22, 2015
In the Chow dynasty, in the country of Tsoo (楚国) lived the venerable Lâi-dze (Lao Lâi-dze 老莱子), who was very obedient and reverential towards his parents, manifesting his dutifulness by exerting himself to provide them with every delicacy.

When Lao Lâi-dze overheard his parents lamenting one day, "Look at our son, he's already in his dotage! Surely our own days must be drawing to a close!" His heart could not endure the helpless feelings that arose. Although upwards of severty of years of age, he was so old that he had lost nearly all his teeth, he declared that he was not yet old, even never mentioned the word "old" in their hearing, and usually dressed himself in partycoloured embroidered garments, and like a child would playfully stand by the side of his parents.

One day he accidentally tripped and fell when he carried two buckets of water into the house, he saw the concerned looks on his parents’ faces, he started wailing and crying like a child, and wriggling on the wet floor and soaking his foolish looking wig, this ridiculous show sent the old folks into gales of laughter. From this incident he would often trip up on purpose, sending water showering over the floor, feigning to slip, falling to the ground, wailing and crying like a child, and all these things he did in order to divert his parents from their meloncholy feelings.

Whenever the venerable Lao Lâi-dze acted like a playful child, his mother was delighted, and manifested her joy in her countenance, thus did they forget her old age. 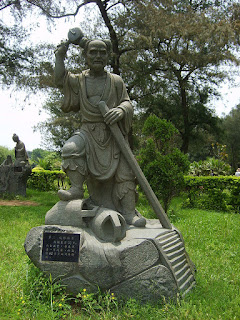 Lao Lâi-dze was a contemporary of Confucius, and the master of a Tâoistic school, the grand historian Sze-mâ says Lao Lâi-dze published a work in fifteen sections on the usefulness of Tâoism. He is one of the twenty-four examples of Filial Piety.
Chuang Tzu says Lao Lâi-dze once gave lectures to Confucius. One day a disciple of Lâo Lâi-dze, while he was out gathering firewood, met with Chung-nî. On his return, he told (his master), saying, 'There is a man there, the upper part of whose body is long and the lower part short. He is slightly hump-backed, and his ears are far back. When you look at him, he seems occupied with the cares of all within the four seas I do not know whose son he is.' Lâo Lâi-dze said, It is Ch’iû; call him here;' and when Chung-nî came, he said to him, 'Ch’iû, put away your personal conceit, and airs of wisdom, and show yourself to be indeed a superior man.' Chung-nî bowed and was retiring, when he abruptly changed his manner, and asked, 'Will the object I am pursuing be thereby advanced?' Lao Lâi-dze replied, 'You cannot bear the sufferings of this one age, and are stubbornly regardless of the evils of a myriad ages:--is it that you purposely make yourself thus unhappy? or is it that you have not the ability to comprehend the case? Your obstinate purpose to make men rejoice in a participation of your joy is your life-long shame, the procedure of a mediocre man. You would lead men by your fame; you would bind them to you by your secret art. Than be praising Yâo and condemning Chieh, you had better forget them both, and shut up your tendency to praise. If you reflect on it, it does nothing but injury; your action in it is entirely wrong. The sage is full of anxiety and indecision in undertaking anything, and so he is always successful. But what shall I say of your conduct? To the end it is all affectation.'