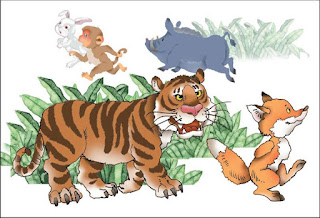 [This story was translated by Ewald Osers from German, published by George Bell & Sons, in the book 'Chinese Folktales'.

Osers noted that this story was from oral tradition. He seemed not aware of the origin of the idiom “The Fox Assuming the Majesty of the Tiger” 狐假虎威, or translated into “a fox exploits a tiger’s might”, or “Fox Borrowing the Awe of Tiger”, the simplest translation is the title of this story, “the fox and the tiger”.  I notice a  slight difference between the Osers’ version and the original story recorded in the book “Intrigues of Warring States”, or “Strategies of the Warring States”: --
‘During the Warring States period (475–221 B.C.), Zhao Xixu was a valiant general in the state of Ch’u. He was dispatched by the king of Chu to oversee the northern borders of the country. Zhao’s reputation as a formidable foe spread and the warlords from the north were all terrified of him.
‘One day, the king of Chu said to officials in the imperial court, “I’ve heard that all the northern warlords are very afraid of Zhao. Is that true?”

All were silent. After a little while, one of the ministers, Jiang-yi, stepped forward and said to the king: “Your majesty, you know how a tiger likes to catch all kinds of animals for food. Well, one day, a tiger caught a fox.’

Then Jiang-yi then related the story how a fox assumes the majesty of a tiger. In his version, the fox claimed that he was sent by God of Heaven to rule over all animals, and he led the tiger into the forest instead of ‘big high-way’, jungle animals instead of human travellers were scared away.
Jiang-yi said, ‘Now your Majesty rules a state which covers five thousand square li and maintains an armed force of one million people, which you entrust to General Zhao Xixu entirely. It is really the powerful army of your Majesty, rather than General Zhao, that holds the northern states in awe.’ When the King of Ch’u heard this story, he was glad. ]