May 14, 2016
Once upon a time there was a man who dropped a silver bowl into the sea while crossing it. He pondered, "I'm going to make a mark on the water. I'm carrying on my journey now. But I'll come back for it later."

After two months' travel during which he visited Ceylon and many other countries. On seeing a river, he jumped into the water looking for the bowl he had lost before.

"What are you doing there?" people asked.

He replied, "I have lost my bowl. Now I would like to get it back."

People went on, "When did you lose it?"

He answered, "I lost it crossing the sea."

Again people asked, "How long ago did you lose it?"

He answered, "I lost it two months ago."

People asked, "Since you lost it two months ago in the sea, why are you looking for it here in the river?"

He answered, "I made a mark on the water where I lost the bowl. This water looks the same as the other. There seems no difference. That's why I'm doing this."

People went on, "Though all waters are identical, the place that you have lost it is there. How can you find it here?"

Everybody jeered at him.

The heretics, who do not practice the right religious belief, but a fallacious one, suffer from their useless mortification in seeking deliverance. Those men are just like the stupid man who has lost his bowl in the sea and looked for it in the river. 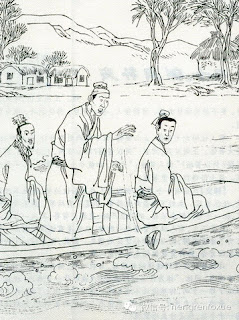