(2) THE STUPID MAN STORES UP MILK

May 12, 2016
Once upon a time there was a stupid man who was about to give a party. He wanted to store up milk for his guests.

"If I milk the cow beforehand every day, he thought, little by little, there will be too much of milk and will not be enough space to store it and it may even spoil. It would be better to let it remain inside of the cow. I'll milk the cow right away at the time of the party."

He then separated the cow from the calf and tied them up apart. A month later, he actually gave the reception. He tried to milk the cow, but the milk had run dry. Some guests got annoyed and others laughed at him.

So are the idiotic fellows who want to give alms at once but prefer to wait until they possess great wealth. It usually happens that, before they can scrape together enough money, it is seized by the country officers or taken away by robbers and thieves or by fire and flood. It also happens that, due to their sudden demise, they are not in time for giving alms.

This is just like the story of the stupid man who stored up milk. 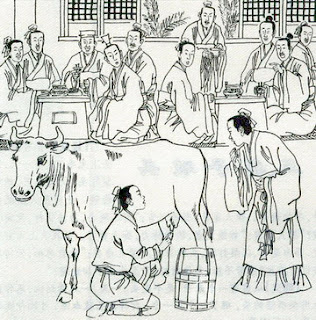