(20) THE KING WAS SAID TO HAVE GIVEN REIN TO CRUELTY

May 14, 2016
(20) THE KING WAS SAID TO HAVE GIVEN REIN TO CRUELTY
Once upon a time a man pronouncing his king's crimes, said, "Very cruel is the king. He is incapable of governing."
On hearing this, the king lost his temper without making sure who it was that had said it. He took his deceitful attendant's advice by holding an eminent minister under arrest. He ordered to have his backbone flayed and have his body cut to one hundred ounces of flesh for punishment.
Soon afterwards, a man testified the minister's innocence to the king. To his regret, the king ordered one thousand ounces of flesh is given to the minister to make up for what was cut off from his body.
Later, when the minister gave a groan with pain at night, the king asked, "What's wrong with you? I have given you back ten times more than I had taken from you. Are you not satisfied with it? Why are you still moaning?"
A bystander replied, "Oh! My great king! If anyone cut your Majesty's head and gave back one thousand other heads, could you Majesty keep out of the way of death? How could getting ten times of the flesh the minister relieve himself the pain?"
So is the stupid man who is greedy for the present pleasure but not afraid of the consequences for the hereafter. He makes people around him miserable and puts them into requisition trying to make a fortune. On the other hand, he hopes to redeem his sins and obtain blessedness.
This stupid man is just like the king who first flayed and punished someone and then tried to give him back the flesh. It is impossible that the pain can be eased. 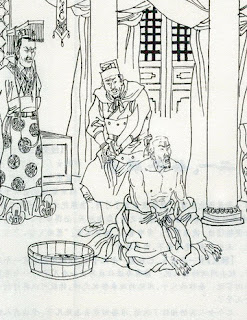