(24) TO CULTIVATE THE BOILED SESAME

May 15, 2016
Once upon a time, a stupid man who, after eating the raw sesame, found it not as tasty as the boiled kind. He said to himself, "I would boil the sesame before cultivating it. This way I could produce better sesame."

He then boiled and cultivated it as he had planned. However, the attempt failed altogether.
So are the people at large who consider it difficult to follow Bodhisattva's practice, due to the strict requirement of eternities of the strenuous efforts. Finding no pleasure, they think that it will be easier for them to become Arahant's by cutting quickly off the transmigration, without realizing that they would never attain Buddhahood that way, just as the boiled seed that would never grow.
This is just like the story of the stupid who tried to cultivate boiled sesame. 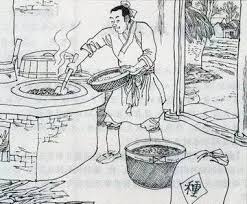