May 16, 2016
Once upon a time, there was a village, which was located five Yojanas away from the city and supplied pure spring water. The king ordered the water to be sent to him in the palace every day by the villagers. Becoming utterly weary of the irksome task, they all wanted to move away to some remote place.

To them, the village chief said, "Don't go away. I'll talk with the king for you to alter the distance between here and the palace from five Yojanas into three Yojanas. It would be closer for coming and going without much weariness."

The chief hastened to report to the king who changed the mileage. People were delighted at knowing this. Some of them said that there was no difference whatsoever. Most still stayed on, because of their newly reassured confidence in the king.

So are the people in various walks of life.

Those who devote themselves to the right religion for crossing the Five Paths toward the Nirvana City, intend to abandon their faith when they are weary and exhausted. Traveling by the transmigration boat, they are unable to make their way toward the shore.

However, Buddha, the king of the Law, has many expedient means from the One Vehicle to the Three Vehicles. Those who follow the Hinayana sect are glad to hear those words and find it easier to practice. Therefore, they spare no effort to do good deeds and improve themselves spiritually so as to make their way of transmigration toward the other shores. Afterwards, they realize that there is no Three Vehicles but ones. Because of the confidence in Buddha's words, they do not want to abandon their faith by then.

This is just like the story of the villagers ending pure spring water. 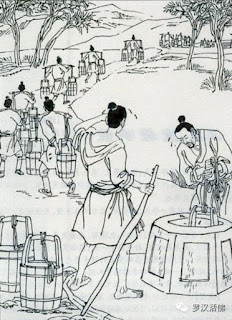