May 16, 2016
Once upon a time, there was a man who went to the mountains to learn Buddhist Priesthood. He succeeded in becoming an Immortal possessing five supernatural powers. His divine vision could perceive all hidden sundry treasures. Upon hearing it, the king said to one of his ministers excitedly:
"In order to add more valuable things to my treasury, could you make this man live permanently in our country?"

The stupid minister went to this man soon afterwards and took his eyes. He then went back to the king and said, "I have gouged out his eyes so he couldn't go away but stay in this country forever."
The king exclaimed, "What is important for his staying in this country is that he could perceive all hidden treasures. Now that you have gouged out his eyes, he is useless to me."

So are the people at large. Upon seeing a monk making strenuous efforts to meditate on the Fourfold stage of Mindfulness and the impurities or the human body on mountain groves, among tombs, in the wilderness or under a tree, a layman invited him home to practice by making various offerings. But in so doing, he destroys the monk's good works done before and his chance of attaining Nirvana. Therefore, he makes him lose the benefit of the eyes of Enlightenment without obtaining anything.
This is just like the fatuous minister blinding the man with no avail. 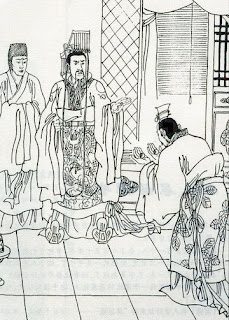