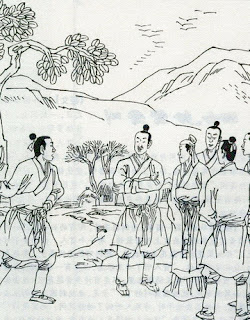 Once there was a village whose people jointly participated in stealing a yak for food. The man who lost the yak followed their trail to the village. He called out to the villagers, "Do you all live in this village?"
The villagers replied, "We live in no village."
Again the man asked, "There is a pond in your village. Have you eaten the yak together on the side of the pond?"
Replied the people: "We know of no pond."
Again he asked, "Is there any tree near the pond?"
They answered, "We know of no tree."
Again he asked, "Were you on the east side of your village when you stole my yak?"
They answered, "We know of no east direction."
Again he asked, "Wasn't it at noon when you stole my yak?"
They answered, "We know of no noon time."
Again he asked, "Although it is possibly true of your first three answers, how can you say there is no direction and no time in all the world. Now I know you are lying. So I don't believe you at all. Sure enough, you have stolen my yak. Haven't you?"
Thereupon, the stealer could not but admit it.
So are those who break commandments. People who hide their sins are reluctant to disclose them. They will, however, go to hell after their death. Since Devas and good gods possess supernatural eyes, people should not even try to deceive them just like the villagers should not refuse to admit stealing a yak for food.