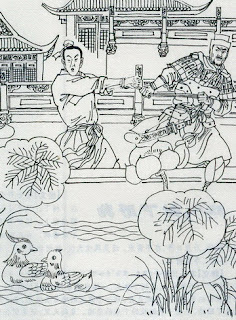 It happened once that a foreign country was celebrating its Religious Day for festivities. All women wore blue lotus flowers as ornament in their hair.
To her husband, a woman said, "If you can get blue lotus flowers for me, I shall remain as your wife. Otherwise. I'll walk out on you."
Her husband was capable of crowing like a duck. He then entered the king's pond to steal blue lotus flowers. He crowed when he was caught by the palace guard. The guard asked: "Who are you?"
With a slip of the tongue, the poor man replied: "I'm a duck."
He was arrested and was taken to the king. On the way, he crowed again. Thereupon, the guard said, "You didn't crow properly before, what's the use of doing so now?"
So are the stupid in the world.
One who in his lifetime does all kinds of evil deeds to the others, is reluctant to repent and subdue his mind. Only at the time of his demise, he says, "From now on, I shall start to do good deeds."
The guard will nevertheless send him to the King of Hell. It is too late for him to want to do good deeds, just as the stupid man who could crow like duck.