(5) GETTING THIRSTY ON SEEING WATER

May 12, 2016
Once there was a fellow desperately in need of water for his thirst. On seeing the blazing fog, he mistook it for water. He pursued it until he reached the Indus River. But he only looked at it without drinking. A bystander asked, "You are suffering from thirst. Now that you have found water, why don't you drink it?"

The fellow answered, "If I could drink up all that water, I would do it. Since there is more water than I can finish, I would rather not drink it at all."

As soon as people heard this, they laughed aloud at him. The heretics, acting against all senses and reasons, think since they are unable to keep all the Buddhist commandments, they refuse to accept any of them. They will never attain the path of Enlightenment and thus subject to transmigration in time to come. They are just like that stupid thirsty fellow who gets laughed at by his contemporaries. 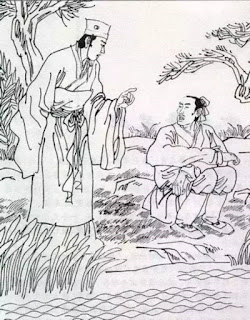