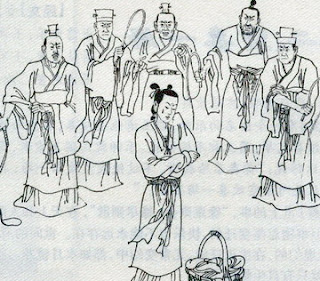 Once there were five men who together bought a maid to whom one of them said, "Get my clothes washed."
Another man also told her to do the same thing. But the maid said he would wash for whoever gave her clothes first. Angrily the second man said, "Since I have bought you with others, how can you wash only for the first one who gave the elder?"
Then he beat her ten strokes with a whip. Thus she was whipped as much by each of the five masters.
So are the five components of human bodies, which are the sources of annoyances. They whip the sentient beings with birth giving, old age, sickness, death and numerous other miseries.