(6) THE DEAD SON IS ABOUT TO REMAIN IN THE HOUSE

May 13, 2016
Once upon a time there was a man who brought up seven boys, one of whom died. Finding the son dead, he intended to leave the body in the house and moved out himself. A bystander said to him, "You know the living and the dead go separate ways. Since your son is dead, he should be quickly buried in a far away place with all due solemnity. Now why do you want to leave your house and let your dead son remain here?"

When the man heard this, he decided to bury his son and not let the corpse lie at home. He then thought he would have to kill another son to hang one body on each end of the pole to keep in equilibrium and carry them for burial in a long way off the forest. That seemed the only thing possible for him to do and he did it. His contemporaries laughed aloud at his unprecedented eccentricities.

A monk, who secretly broke one commandment, felt afraid to confess it. He would pretend that he had scrupulously kept all commandments and led a life free from evil and defilement.

Some wise men might then tell him, "A monk should keep the commandments just like brilliant pearls should be protected from being damaged. How can you break what you have accepted? Now you are reluctant to confess them."

The offender would answer, "Now that I have to confess, I might as well do more breakings. Then I'll confess all my sins at once."

Consequently, he broke more commandments by doing many evil things before his confession. This monk is just like that stupid man who kills another son when one dies. 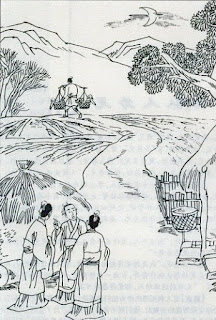