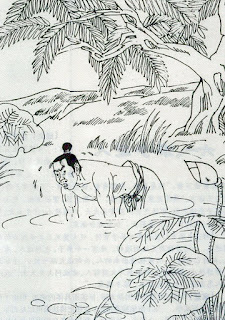 Once upon a time, there was a man who went to a large pond where he thought he had seen the shadow of pure gold at the bottom of water. He gave a cry of joy and jumped into the water to feel about the mud and search for it.
A few moments later, he began to feel very tired. He could not find any gold and he then got out of the pond. But as soon as he was out of the water that became clear in no time, the golden shadow turned up again. Then he dived once again to do more searching. Still he found nothing. At this point, his father came looking for him. Seeing the state he was in, his father asked, "What have you been doing to get so tired?"
The son replied, "There is pure gold under water. I searched for it, but could find nothing."
The father could also see the shadow of pure gold in the water. But he soon realized that it was in the trees. So he knew what was in the water was mere reflection. Then he told his son that it was held by the bird's beak and brought it in the trees. Following his father's instructions, the son immediately got the gold from the trees.
So are the ignorant in the world. They hold on to tile thought of ego in the shadow of non-ego, just like the stupid man looking desperately for the gold without success.