July 13, 2016
Once upon a time, there was an old house where the rumours had it that an evil demon often appeared. People were so frightened that no one would dare to be in it. A man claiming himself dauntless said: "I would like to spend a night in this house." So he did.

Upon hearing from the bystander that the house was frequently haunted by an evil demon, another man also wanted to do the same proving himself to be more intrepid than the first one. He tried to enter by pushing the door.

The one who had got into the house first thought the second one to be the demon and blocked the door to his entrance. The second, unable to open the door, thought the first one to be the demon. They first argued and then began to fight until dawn. When finally coming face to face, they realized that they were both mistaken.

So are the people at large.

Our ego is subject to the law of impermanence and cause-effect, and therefore there is no mastering power in our body. Considering and analyzing all in all, one can only ask who the ego is. However, human beings indulge in ill-natured gossip everywhere, and fight each other like those men in this told story. 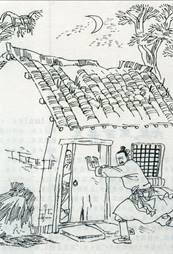