July 13, 2016
Once upon a time, there was an elderly man who sent a servant to buy him some apples. He gave him orders as follows, "You'll buy some good and sweet apples for me."

The servant then went on an errand with money. The owner of the apple orchard said to him, "All my apples are good and sweet: There is not a single bad one. You'll know it when you taste one."
The servant said, "I'll buy some after I taste every single one of them. How do I know about the rest. If I only taste one?"

After tasting them one by one, he bought the apples. The master did not like the sight of all these half-eaten apples and he threw them all out.

This is also held to be true with the people at large.

Seeing that all those who keep almsgiving commandment, can acquire great wealth and happiness, physically at ease and mentally stable. People still remark in disbelief, "We'll believe it if we can get them for ourselves."

To see for yourself in noble and base, rich and poor of this World, you would attribute those people to retribution of the previous lives. But they hardly know to deduce the Law of Cause and Effect, which they are reluctant to draw a general rule from particular instances. It is to be regretted for their disbelief. For once death approaches them, they have to leave their worldly possessions just like the elderly man throwing out all the half-eaten apples. 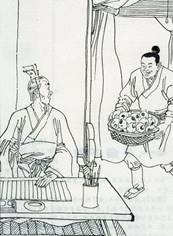