July 13, 2016
Once upon a time, there was a man who rode on a black horse to a battle. Out of fear, he was incapable to combat. He daubed his face and eyes with blood and dirt. Pretending to be dead, he laid down in the midst of corpses. The horse on which he had rode was taken away. After the battle was through, he went home bringing with him the cut-off tail of a white horse that belonged to another soldier. Back at home, he was asked, "Where is your old horse?"

The man replied, "My horse is dead. I have brought back with me its tail."

People said, "But your old horse was black. How did its tail turn white?"

Speechless, the man was laughed at.

So are the people at large. Despite of their pretending to be good, pious, compassionate and restraining themselves to eat meat and drink wine, people indulge themselves in killing and injuring other sentient beings and thus raising to pain and cruelty. Furthermore, they boast that they do good deeds, but there is nothing they will not do to commit sins, just like the stupid man and his horse. 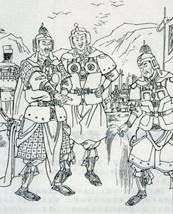