(76) THE FARMER LONGED FOR THE PRINCESS

July 13, 2016
Once upon a time, there was a farmer who went to the city and saw the princess who was very graceful. He found she was quite a rare beauty. Afterwards he thought of nothing else but the princess day and night. Since he could not find a way to have a talk with her, he became yellow and fell very ill from his love-sickness. His parents and relatives asked him what had happened to him. He replied, "Yesterday I saw the graceful princess with whom I would like to get acquainted. But I've been unable to think of a way. This is why I have fallen ill. I'll die soon!"

The parents and relatives said, "We'll find a way. Don't be so upset."

Two days later, they said to him, "We have found a way. Unfortunately, she didn't like it at all."
Upon hearing these words the farmer got very happy and said with a big smile to other people that she would come to him if he sent for her.

This is also held to be true with the stupid men of the world.

A stupid man knows of no seasons of spring, summer, autumn and winter. He sows the land with seeds in winter hoping that they will grow. He gains nothing except wasting his energy in vain. All are lost as buds, stalks, branches, and leaves.

Getting a little merit, the stupid of the world are satisfied with what they think are the attainment of Enlightenment, like the farmer who longed for the princess. 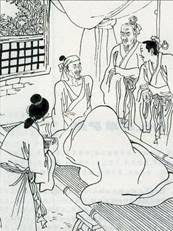