(79) CARRYING CHAIRS FOR THE KING

July 13, 2016
Once upon a time, there was a king who wished to go to the garden named "Free From Care" for a good time. He ordered one of his ministers, "You'll drag a lounge chair to that garden for me to sit and take rest on."

The minister considered it a demeaning job for a minister to drag a chair. So he refused to do it and replied, "I would rather carry it on my back with a pole than dragging it."

Then the king put thirty-six chairs on his back and asked him to carry them to the garden. Such a stupid man was laughed by the people at large.

Seeing hair fallen from a woman's head on the ground, people are reluctant to pick it up, in the name of keeping the commandments. However once disturbed by ignorance and desire, they do not mind picking up thirty-six unclean things at a time such as hair, capillary, nail, tooth, excrement, urine, etc., without feeling shameful and even keep them as long as they live. This is just like that stupid man bearing chairs on his back. 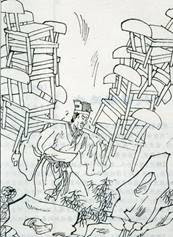