(88) THE FEMALE MONKEY AND A HANDFUL OF BEANS

Once upon a time, there was a female monkey holding a handful of beans. After dropping to the ground a grain of bean, she dropped all the beans in her hands by looking for the first one. All beans were then eaten by chicken and ducks before long.
This is held to be true with the common monks. Those who break one commandment usually do not like to confess. Later, they break other commandments to such an extent that they end up breaking all of them.
This is just like the female monkey who loses all beans by looking for a grain of bean. 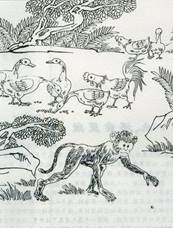