Once upon a time, there was a man who was having an affair with a married woman. They were together when her husband came back. He found out their affair and stopped outside the door waiting for the man to come out to kill him. To the lover the woman said: "My husband knows what is going on. There is no way out but the mani."
She wanted the man to escape by means of the sewer. The man misunderstood her to mean looking for the mani pearls. He looked everywhere but in vain. He said to himself: "I'll not leave here, if can't find the mani pearls."
He was then killed by her husband.
This is also held to be true with the common people.
It is said, between birth and death, we live a life of impermanence, suffering, emptiness and unreality of ego. We have to reject the two extremes of annihilation and permanence by holding fast to the golden mean in order to get deliverance. However, the common people, misunderstand the two extremes to refer to the universe being finite and infinite and the human beings having ego and having no ego. Therefore, they are unable to grasp the meaning of the middle way to avoid extremes. After being stricken with sudden death, they will be killed out of impermanence and falling into the Three Evil Paths of Transmigration.
This is just like the stupid man getting killed looking for mani pearls. 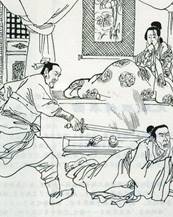